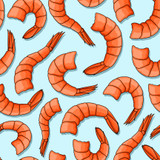 At Biloxi Shrimp Co., we are well aware that shrimp are one of the most popular seafood choices in the United States. Our wild-caught U.S. Gulf shrimp are shipped throughout the country and deliciously featured in a multitude of recipes. But why are these magnificent shellfish so popular in movies? Let’s find out!

In this oft-quoted film, Tom Hank’s character, Forrest Gump, goes to the war in Vietnam and makes a friend in Bubba, played by Mykelti Williamson. Both characters are from the South and bond over their love of seafood. While the pair of soldiers are on watch in a combat zone, they agree to go into the shrimping business together after the war. Bubba has it all figured out, telling Gump they will split everything down the middle and have all the shrimp they can eat.

But the most famous shrimp-related exchange in the movie comes from Bubba calling shrimp the fruit of the sea and describing their use in shrimp recipes ranging from barbecue to baking, including kabobs, gumbo, soup, salad and burgers. After Bubba is killed in the war, Gump goes on to launch a shrimping business in his honor. The character of Bubba loves catching, cooking and eating shrimp, like many others in this country, and his love of shrimp also reflects his love of home.

In this popular animated film, animals are auditioning to be included in a singing competition. The goal of the competition is to save a theatre. Who are the first to perform? A trio of acrobatic pink shrimp in a tank of water, wearing shiny pink leotards. The song this trio sings is called, “Crazy in Love.” An apt choice given the love that people in the U.S. have for these delicacies.

Even though they don’t end up on the soundtrack for the movie or go any further in the storyline, the shrimp trio’s scene is one of our favorite bits.

In a movie that features an oddly softhearted shark named Lenny, shrimp are liberated from a cocktail dish. During a family meeting, the patriarch of the shark family demands that his son eat a shrimp. After the chosen shrimp tells its tale of woe to all the sharks at the table, Lenny starts crying and refuses to eat the shrimp cocktail. He then sets all the shrimp in the cocktail free. Who would do that?

This wildly popular film features an animated shrimp named Jacques. He sports a French accent and is scrupulously clean. When Nemo comes into the tank in a dentist's office, resident Jacques is called upon to clean him up, decontaminating him with expert skill. Later, Jacques starts up the ring of fire atop the fish tank volcano for Nemo’s initiation ceremony into the fish tank group. Finally, Jacques assists in a plot to escape the fish tank, which includes jamming the filter and ceasing to clean the tank so that the glass becomes dirty, forcing the dentist to bag the tank’s inhabitants while he cleans the tank. The plan is for the bagged fish, and shrimp, to roll out the window into the harbor, but of course, it’s not that easy!

The many parts that shrimp play in these movies provide a glimpse of just how popular they are in the United States. Plentiful and delicious, wild-caught Gulf shrimp are some of the best in the country. Why not choose one of these movies to watch and pair it with Biloxi Shrimp Co. to create your favorite shrimp dishes and make a tasty evening of it?