10% OFF SITEWIDE Now thru 12 Noon CT Thursday, July 7 all orders are 10% off! Discount applied at checkout.

A Visit to the Isles of Biloxi

Article originally written by Jane Shambra, a local Biloxi writer and Librarian at the Biloxi Public Library and published in BNews Monthly, the monthly newsletter of the City of Biloxi.

Downtown Biloxi is situated on a peninsula. That means that our mainland is surrounded by water on three sides. What’s inside the surrounding waterway are actually treasures: islands of all sorts of sizes, landmasses that served as giant stepping stones as well as historical landmarks which formulate many of the chapters of our unique history.

To the south of our sandy beaches, we see a body of water. Most think of it as the Gulf of Mexico. This waterway is actually the Mississippi Sound and appears as such on navigational maps.

The Sound is about eighty miles long and extends from Mobile Bay westward across the entire length of the State of Mississippi. Nearby freshwater rivers (the Escatawpa, Pascagoula, Tchoutacabouffa, Biloxi, Wolf, and Jourdan) mix with the waters of the Gulf of Mexico, resulting in a half-salty composite. There is also a row of Barrier Islands that serve an important purpose throughout history. The islands protect our mainland from the direct impact of the major wave action of storms and help to prevent soil erosion.

When Monsieur Lemoyne D’ Iberville landed on our shores in 1699, he assumed the role of being the Godfather of Biloxi, as he declared the names of each of the islands in the Mississippi Sound.

Journals in the past even describe special little boats that early settlers had to hand-make to travel from landmass to landmass. Cypress trees were burned, then scooped out with cockle shells forming the perfect navigation devices for our shallow waters.

All our nearby islands have, together, played a significant role in our seafood industry, food supply, recreation, colonization of our area, and even in war efforts, while supporting the well-being of the mainland.

In 1699, Monsieurs D’Iberville and Bienville originally named this island Bourbon Island. Later, in the early 1700s, its name was changed to Isle aux Chats because the French thought that unusual animals inhabiting the island appeared to be huge cats. They were actually raccoons! 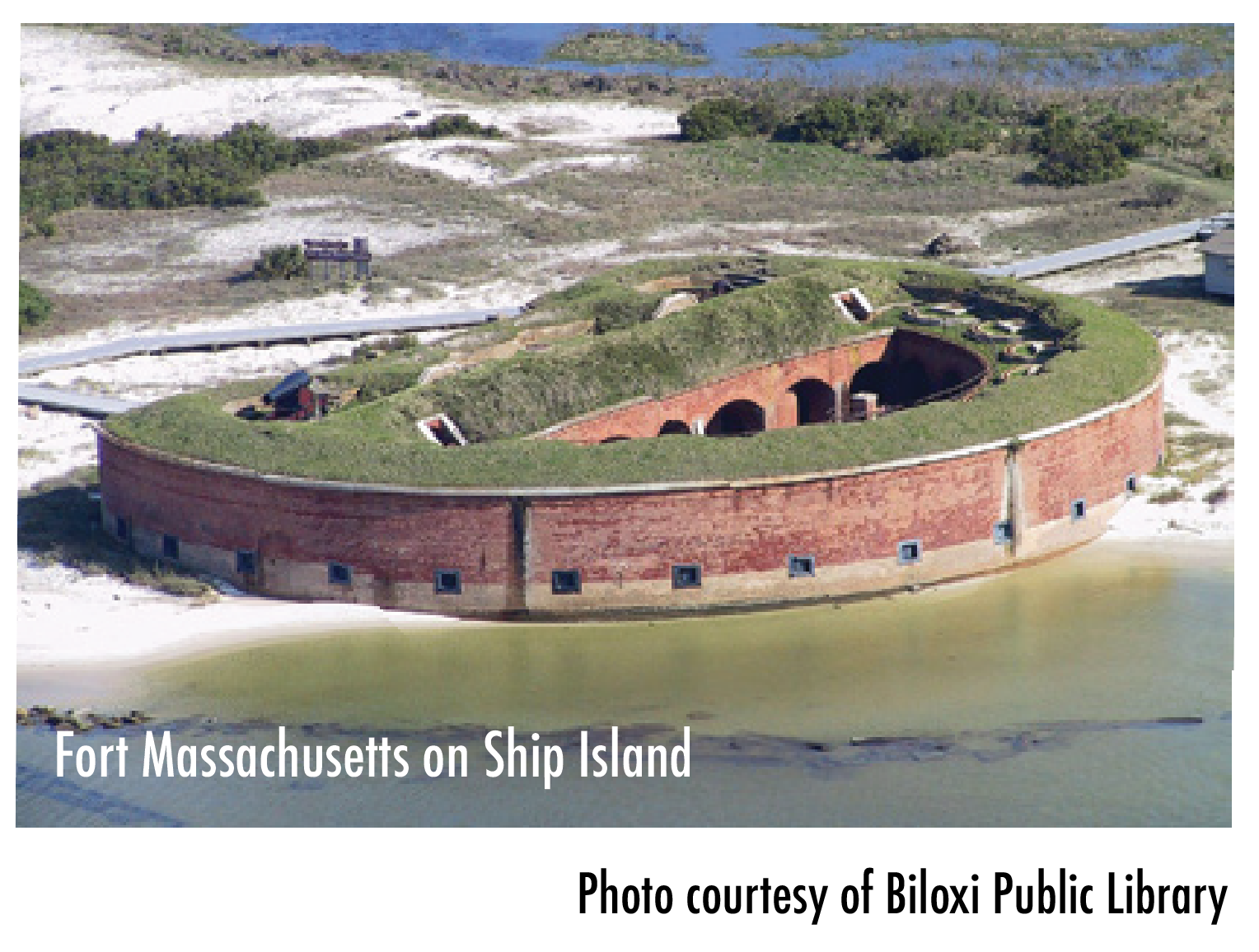 Stories are told that when the raccoons thrived on oysters, they would sometimes get their paws stuck inside the shells. They then had to wait for the next high tide for the oyster shells to magically open up and be freed. 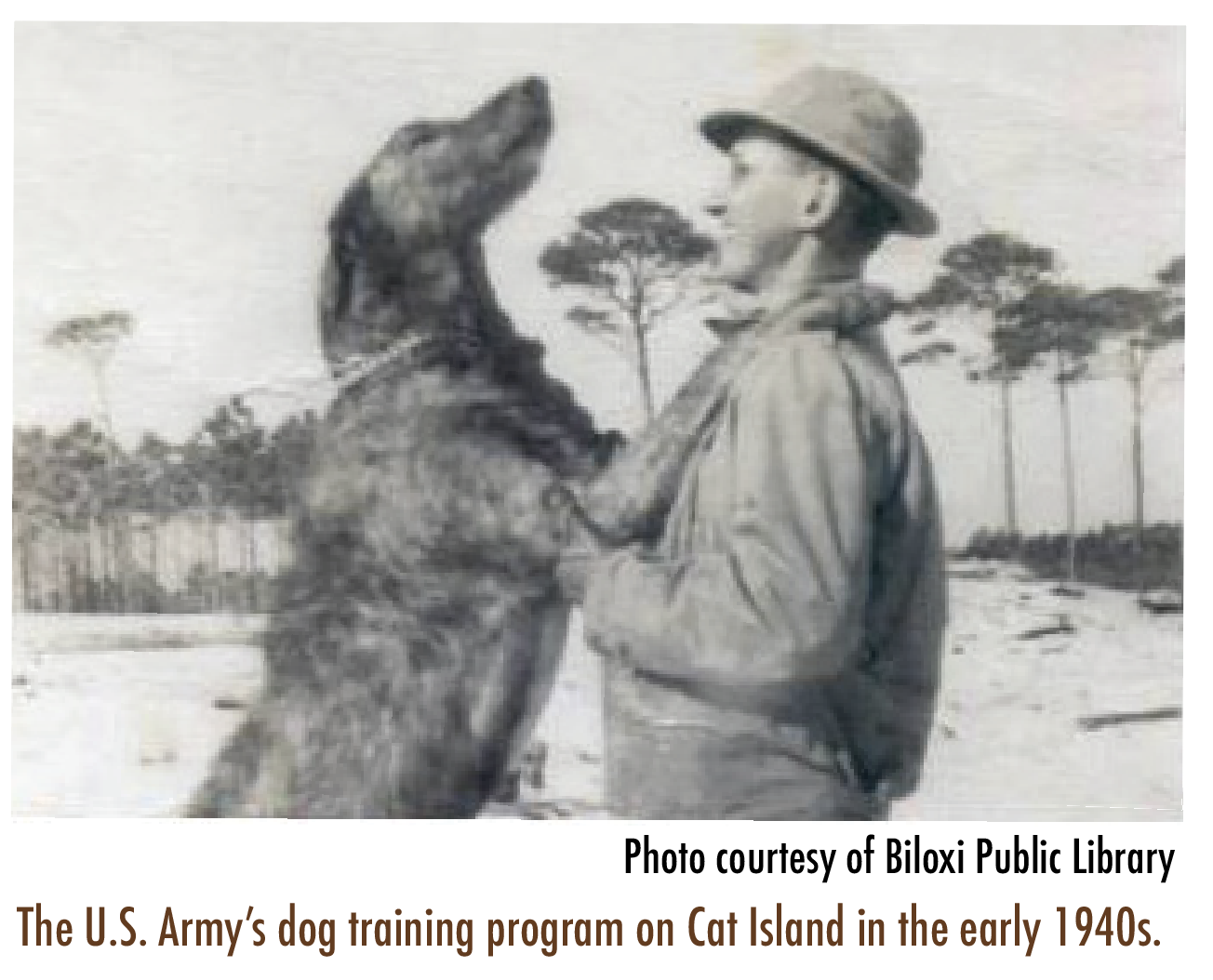 Another popular animal story is that of the dogs of the island. There was a specially planned program to train dogs for combat, utilizing Cat Island as the U.S. Army’s training grounds.

The Dogs for Defense, Inc. (DFD) group encouraged the donation of healthy dogs to be trained for specific war efforts. By 1944 it was established that seven breeds were optimal candidates: German Shepherds, Doberman Pinschers, Sheepdogs, Collies, Siberian Huskies, Malamutes, and Eskimo dogs.

Of all the barrier islands, Ship Island probably played the most significant role in the habitation and history of the settlement of this area. Around 1699 this island was first called Isle Surgere by one of Iberville’s boat commanders. 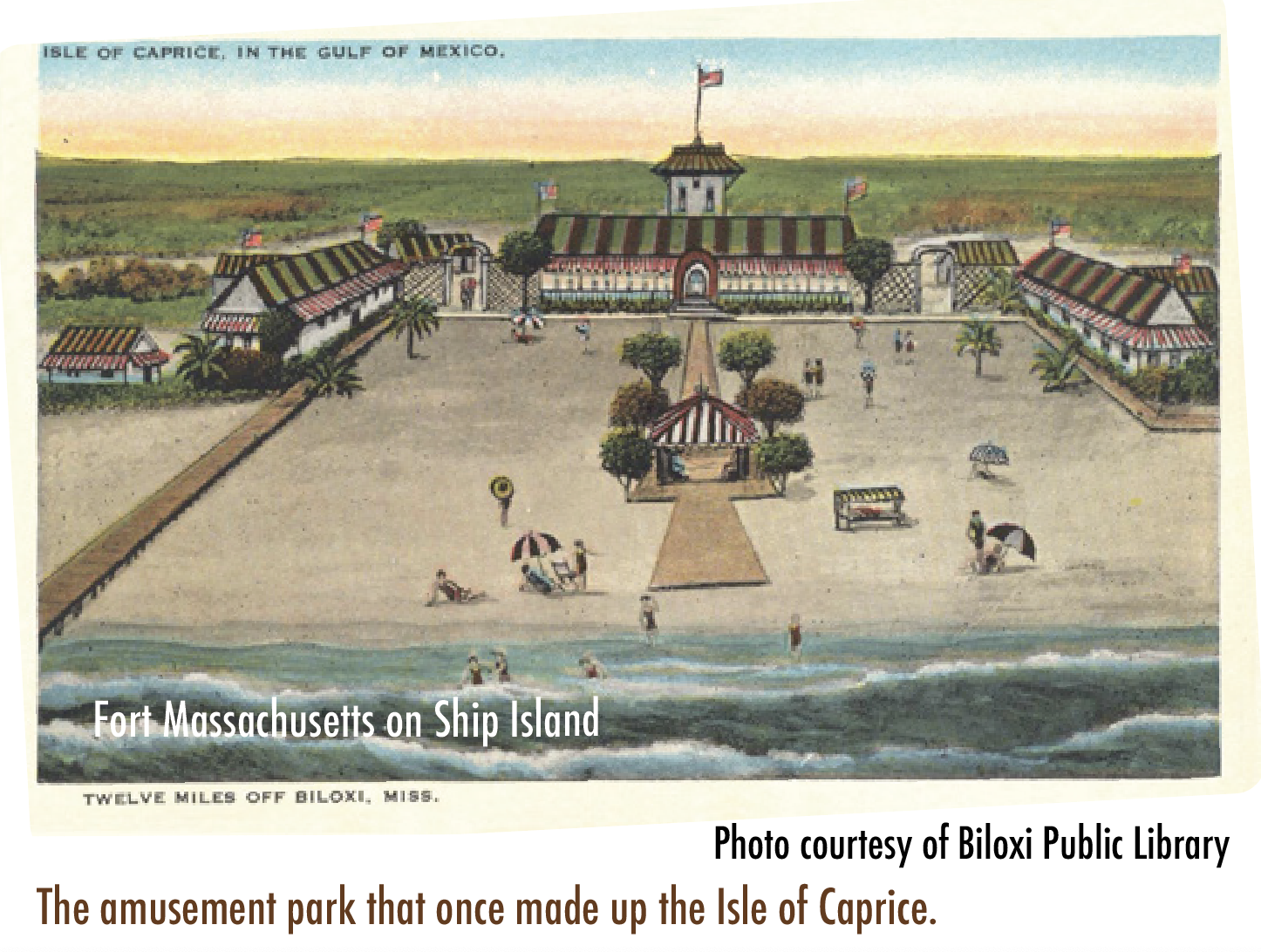 The island was the perfect landing spot for the giant wooden sailing ships. Positioned about 12 miles from Biloxi, the waters were deeper there and provided a perfect safe port from which smaller boats could safely travel to our mainland. It also had ample freshwater which was crucial to the health and well- being of travelers to the New World.

In the 1860s, Fort Massachusetts was added to the island but wasn’t named until the 1880s. Still standing today, this famous Fort cost about $187,000 to build, using about a million bricks. Fort Massachusetts is currently operated by the National Park Service.

The chapters in Ship Island history include its importance as a port and trading post for our earliest settlers, a lurking-place for the British planning strategy for the War of 1812 and the Battle of New Orleans, a Confederate Prisoner of War Camp, a burial ground, a base for the 2nd Louisiana Native Guard Volunteers, one of the first U.S. combat units to fight in the Civil War, and a national quarantine station for inspection and detention of passengers and ship crews.

Of all our barrier islands, Deer Island is perhaps our most popular nearby landmass. Throughout history, there have been
chapters written about its pirate lure, buried treasure, ghostly apparitions, archaeological investigations, burials, and several attempts at amusement parks.

In the early 1700s, historical publications tell us that early settlers wanted to inhabit the entire island with rabbits that they could use for food and furs.

Very soon, on April 1, 2022, the U.S. Census Department plans to release the 1950 Census records, listing who lived where, maybe even on the island!

In about 1925, some Biloxi developers purchased the island and developed it for use as a casino and resort. In the year 1932, the island sank into the sea. Only the iconic rusty artesian well water pipe remained.

In 1699, this island was called Massacre Island because of the discovery of more than 60 skeletons of both men and women. Sometimes between 1717 – 1732, the name was changed to Isle Bienville. The present name of Horn Island was derived from a story that one of the explorers lost his powder horn there.

Horn Island is also the place that inspired nationally renowned Walter Anderson to create his magnificent works of art.

More nearby islands: Goat and Big

Goat Island, considered a wetland and marshy area, is located just west of the I-110 in Biloxi’s Back Bay and is visible from the northern shores of Biloxi’s Oak Park Subdivision and Keesler Air Force Base.

It is not likely to ever have been inhabited. Newspapers tell us about successful fishing adventures, particularly amazing trout catches. But, why was it named such: was it once shaped like a goat? Was a goat once stranded there? Who knows!

Big Island, is a plot of land located to the east of the I-110, in the waters of Back Bay. This land is currently uninhabited, has some green vegetation, but is considered to be wetland and marshy terrain. Once upon a time, it was called Gorenflo Island where William Gorenflo’s seafood processing plant once thrived before being destroyed by hurricanes.

Cedar Lake Island is located in the middle of the Tchoutacabouffa River, pronounced: CHOO-tah-kah-BUH-fuh....with no T and no ending A. It even housed a sawmill at one time. 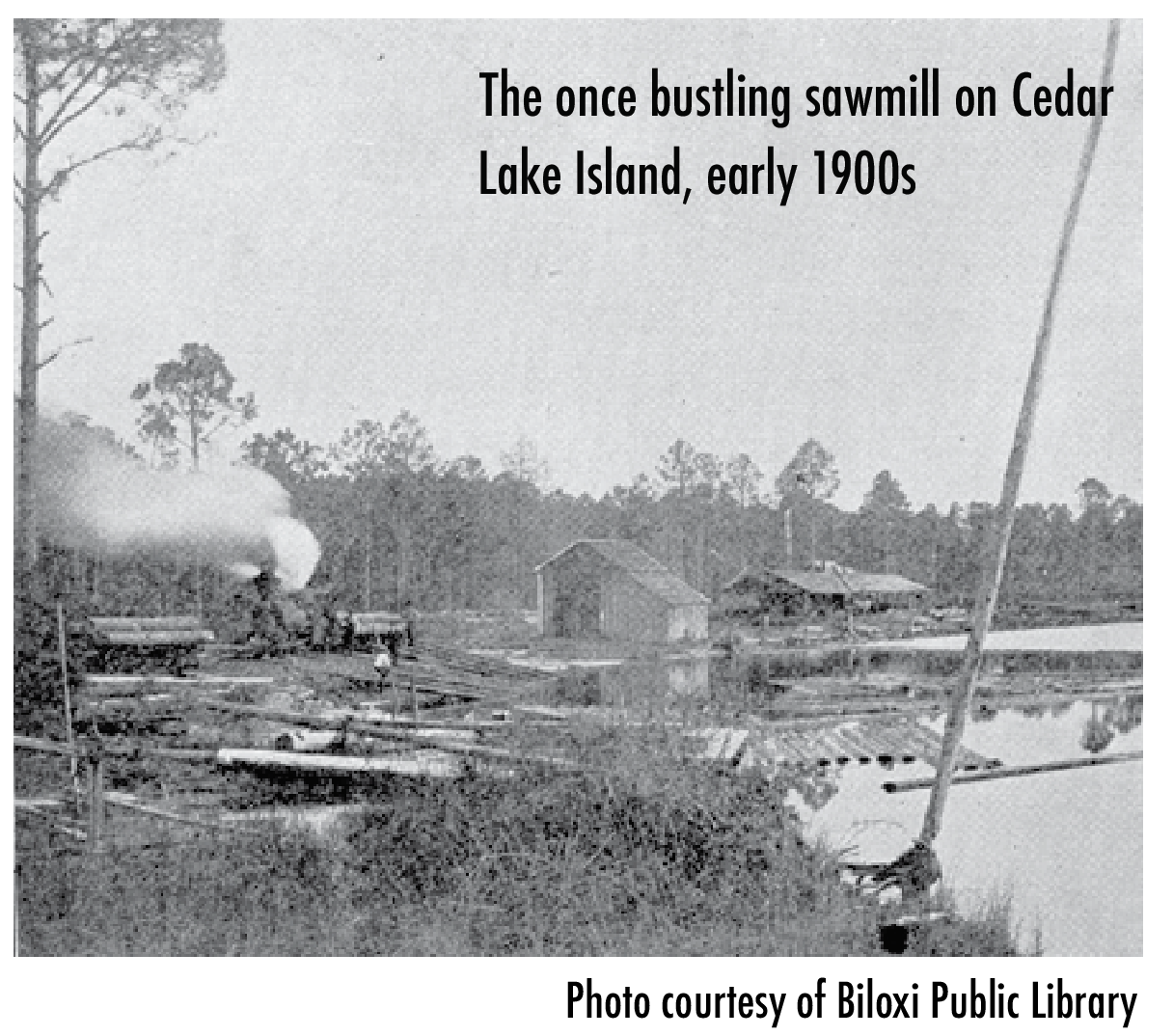 A few years back, the Land Trust for the Mississippi Coastal Plain became caretakers for this unique island, where remnants of century-old buildings are still in place.

Islands are our friends. Not only do they protect our mainland from wind and water abuse, but they also provide places for air, land, and sea animals to rest, eat, and begin their families.

Boaters often stop by these landmasses to pause, picnic, and recreate. Our surrounding waterway are truly cherished treasures.