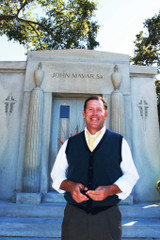 In its centuries of existence, the City of Biloxi has become home to many cherished local traditions. The Blessing of the Fleet, Mardi Gras, and other celebrated events have stood the test of time as ways for our community to come together. However, it is one of our most recent traditions that has proven to be one of the most reverential — a true testament to the lineages of Biloxi families that have been here for generations: the Old Biloxi Cemetery Tours.

Established by the Preserve Biloxi Committee in 2006, the self-guided Old Biloxi Cemetery Tours occur every October and allow those in Biloxi to walk through the Old Biloxi Cemetery and see history truly come alive, as the defining feature of the tours is the historical re-enactments. Actual descendants of Biloxi’s oldest families volunteer to dress up as their ancestors and tell stories passed down through generations in front of their tombstones.

Of course, some of the oldest families in all of Biloxi were shrimping families, including that of our very own co-founder Mark Mavar. In 1898, Mark’s grandfather — John Mavar — emigrated to Biloxi from Croatia and became a deckhand on schooners. By 1926, he owned his own boat, was an experienced commercial fisherman and had saved enough money to purchase a small piece of beachside property to unload boats. Eventually, Mavar Shrimp & Oyster Company was born, and the rest is history. History that still lives on to this day, as Mark himself has participated in the Old Biloxi Cemetery Tours by performing as and telling the story of his own grandfather, John.

“At the age of 16, and with only a fourth-grade education, I took a job shoveling coal on a steamship bound for New York City,” said Mark, speaking as his grandfather, John. “I made that trip several times and realized that I wanted to become an American citizen. So, at the age of 18, I walked into the immigration office, they asked me a few questions and said sign here, and just like that: I was an American.”

Watch the video of Mark’s re-enactment of his grandfather John from 2015 below for the whole story.

"Kakose," which means "How are you?" My name is John Sam Mavar. I was born in 1880 on the island of Molat in Austria, Hungary, which is current day, Croatia.

My family, like many other families on the island, were in the olive growing business, and we were doing very well.

However, after five or six years of consecutive drought, the growing of olives became impossible.

So at the age of 16 and with only a fourth grade education, I took a job shoveling coal on a steamship bound for New York City.

I made that trip several times and realized that I wanted to become an American citizen.

So, at the age of 18, I walked into the immigration office.

They asked me a few questions and said, "Sign here," and just like that: I was an American.

And Citizen America was growing at that time at a rapid pace and needed workers almost everywhere, and I was willing to work.

So I worked in New York for a few years until I learned about the thriving seafood industry in South Louisiana and South Mississippi.

So, once again, I took a job on a set on a steamship, shoveling coal this time, from New York to New Orleans, LA.

And when I arrived in New Orleans, I met many other people that were from the same area of Austria, Hungary in which I was born.

I worked in New Orleans for a few years. and then moved to Biloxi and took a job as a deckhand on a sailing schooner, catching shrimp and oysters.

Not long after I moved to Biloxi, I met my future wife, Olivia Skrmetta.

She was from the island of Brac in Austria not far from where I was born.

She had been here for many years with her family and she worked in the local seafood factories, picking shrimp and shucking oysters alongside her mother.

She had no formal education.

When she turned 19 years old, Olivia and I were married.

She continued to work in the factories and I eventually became a boat captain.

Between the two of us, we earned approximately $16.00 per week.

And I always knew I could do better for my family if I owned my own sailing schooner.

And back then, you could purchase a sailing schooner for approximately $800. However, that was an amount of money that I just did not have.

After every trip home, I would talk to my wife and try to convince her about the benefits of owning our own schooner, and after about three or four years, one night, she looked at me and she said, "Okay."

And she said, "I have $800." She had saved $800 out of our meager earnings and she had it stashed in different locations around our house.

And of course I didn't know she had that money.

I purchased the sailing schooner and continued to sell my products to the local factories.

In 1926, my wife and I had six children, and we had saved enough money to buy a small piece of property at the foot of Maple Street where we opened a company called Mavar Shrimp and Oyster Company. We sold canned shrimp and oysters in small quantities in foreign countries.

It was sold under the brand names of Victor Sea Sweet, American Beauty and Bullhead.

Neither my wife or I had ever visited the country in which we were born, so in 1955, when our youngest son Victor had just graduated from Merchant Marine Academy, the three of us took a trip.

She only had distant relatives. Most of her family had migrated to the United States, to Chile, to New Zealand and to other countries.

We had a wonderful trip. As we were preparing to return home, my wife became extremely ill, and she died in a hospital in the town of Split.

Her body was returned here to Biloxi and she is buried in this tomb with me.

Our sons continued to run the family business and they developed a way to use the small fish that are discarded out of shrimp nets and turn it into a canned cat food.

That was sold under the brand name of Cozy Kitten. Cozy Kitten was very successful.

And a few years later, they developed a dry cat food also sold under the same brand name of Cozy Kitten. In 1988, my son sold our company to the HJ Heinz Corporation.

However, the land on which my factory was located between Oak Street and Pine St was not part of that sale, and today, Harrah’s operates a hotel and casino on that property.

All of our children raised their families here in the city of Biloxi, where their children attended local school.

And all of my descendants are involved in local civic organizations, just like I was.

Thank you all for coming today.