This article was originally written by Jane Shambra with the title "Bets Placed on Biloxi for Years." Jane is a local Biloxi writer, for BNews Monthly, the monthly newsletter of the City of Biloxi. All images courtesy of the Local History and Genealogy Department / Biloxi Public Library / Harrison County Library System.

November 11, 1918 is considered to be the end of the Great War (later called World War I). In 1919, President Woodrow Wilson declared that November 11 would be Armistice Day to commemorate the pride and heroism of those who died in service to this country. Later, on October 8, 1954, President Dwight Eisenhower issued the first “Veterans Day Proclamation” changing Armistice Day to Veterans Day.

For decades Biloxi has had Veterans Day parades. In the 1940’s after Keesler Air Force Base was officially dedicated, servicemen in military attire proudly marched down Howard Avenue. We still continue with this tradition today. 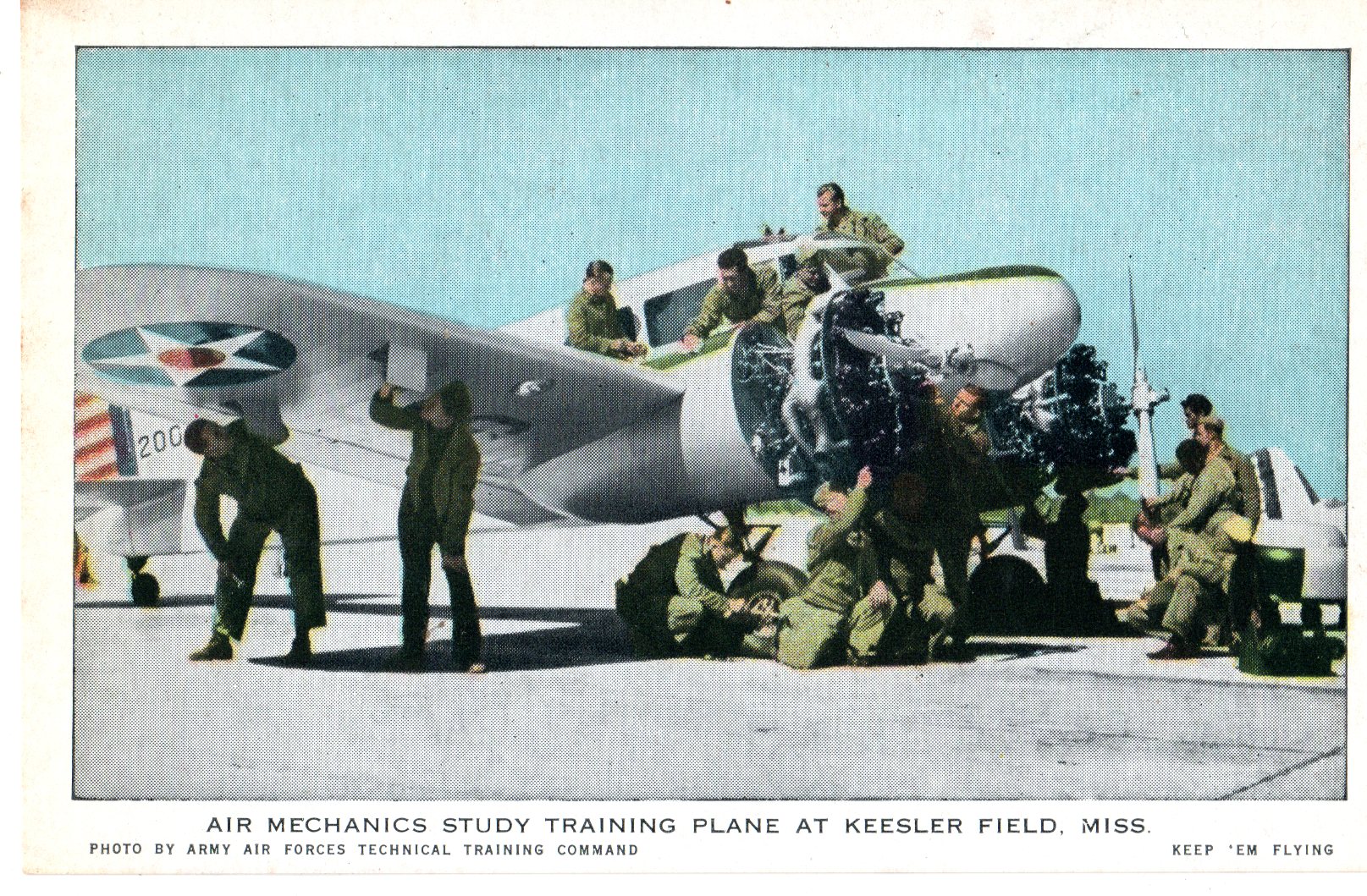 Keesler Air Force Base: This History of the Land

The land where Biloxi’s Keesler Air Force Base is currently situated wasn’t always an Air Force Base. The history of that land goes back centuries.

In 1821, there was a federal land survey on the Mississippi Gulf Coast. During that time, the land was laden with the best quality timber (cypress and oak) to be set aside for the construction and repair of U.S. Navy Vessels. The northwest area of Keesler Air Force Base and all of its Biloxi Bay shoreline was identified as a “Naval Reserve”.

Later, in 1851 and again in 1860, the Biloxi peninsula was again surveyed. The surveys resulted in the location of thirty-seven miles of roadways, including the Pass Christian-Point Cadet Road, running through the current Keesler Air Force Base property.

After a steady progress of improvements, the year 1928 saw a golf course, a Coast Guard Base, a baseball stadium, a zoo, and a park on this location. By the 1930s, a veteran's hospital, a boy scout camp, an airport, and a gun club occupied the land.

In 1935, the City of Biloxi began the construction of a commercial airport, which included a large hangar, weather station, beacon light, and a 3000-foot runway.

In 1938, residents could watch airplane maneuvers flying in and out of this new facility. The airport, constructed with the help of Works Progress Administration (WPA) workers, was the catalyst for the establishment of the birth of one of the finest military technical training facilities in the United States.

By June 1941, the construction of the first barracks began. A total of 650 tents were constructed while waiting for the new barracks to open. The first team of recruits arrived at Keesler field in August of that year. By August 25, the Army Air Corp Station was officially named Keesler Army Airfield. In those days Pass Christian Road (Howard Avenue/Pass Road) went right through the property. 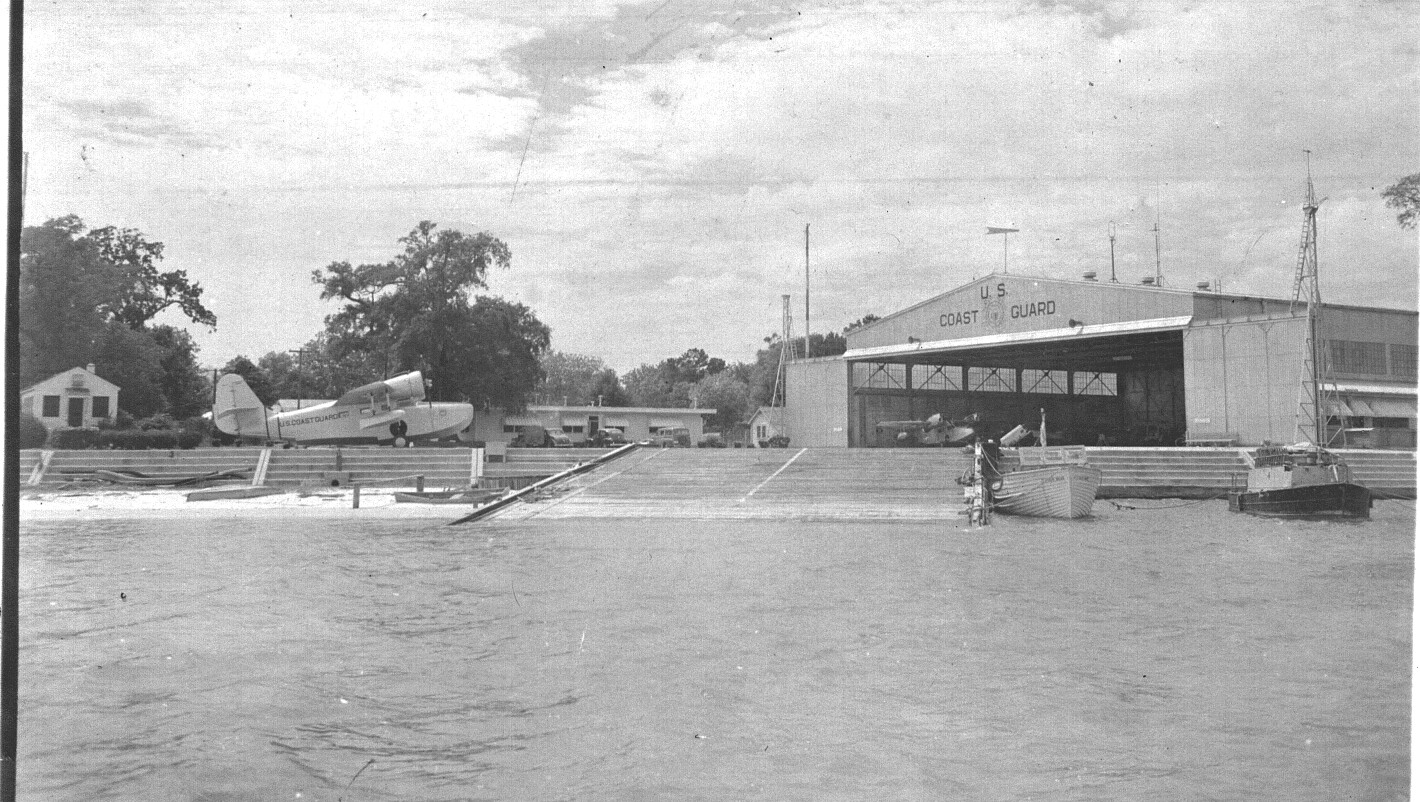 With its beginnings in 1790, the United States Coast Guard recently celebrated its 231st birthday in August. Its original mission was to “combat smuggling and enforce tariff laws” and in 1939 President Roosevelt gave the Coast Guard the responsibility of maintaining the lighthouses.

Today, the Coast Guard’s fleet includes not only small and large boats but aircraft as well. The Coast Guard responds to search and rescue situations and has saved thousands of lives through the years.

In the 1920s, boats filled with illegal liquor were noticeably spotted traveling through nearby marshes, bayous and the Mississippi Sound. Thus, a temporary Coast Guard substation was established in Biloxi to provide service for patrol boats chasing “rum runners.”

In 1927, the City of Biloxi provided a facility for the Coast Guard on our Back Bay, located on the western side of the Naval Reserve
Park. In 1933, this old Coast Guard base was ordered to close. The abandoned Back Bay Coast Guard site later served as a Boy Scouts camp. Boy Scouts' cabins were constructed, and by 1937, Biloxi Mayor Braun announced that the new camp would be built as part of a WPA project. The new huge camp site was frequented by Scouts from five states.

By 1934, the new Coast Guard Base made its new home at Point Cadet. It was very active with amphibious aircraft seen utilizing the new airplane ramp. Old photographs show special landing ramps for these unique airplanes. (Amphibious aircraft are those which are capable of taking off and landing in water.) Sometimes people call them seaplanes.

By 1966, the Point Cadet facility was abandoned and deeded to the City of Biloxi.

In 1986, the Maritime and Seafood Industry Museum established in a Spanish influenced structure built in 1934 as part of the U.S. Coast Guard station.

Fun Fact: Did you know that Biloxi’s iconic lighthouse was once under the jurisdiction of the Coast Guard?

In the year 1967, the lighthouse was decommissioned, and in 1968, the year before Hurricane Camille, the City of Biloxi took ownership. Older pictures of the lighthouse show a huge rock garden around the circumference. The local newspaper reported that these rocks came from a grotto which once stood by the old Nativity Church. 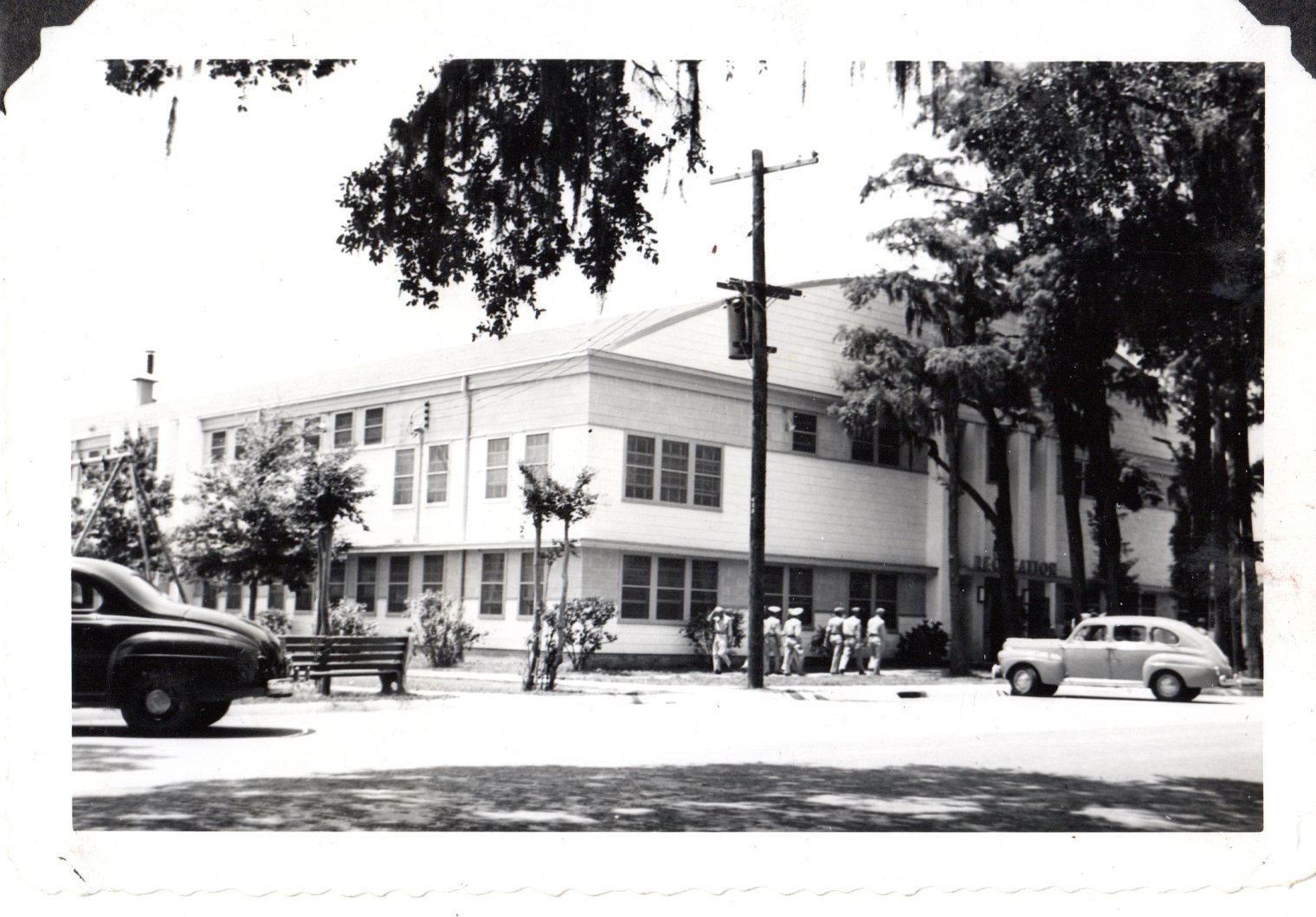 Once upon a time Biloxi had a huge United Service Organization (USO) building which was located next to Biloxi’s Small Craft Harbor where the Glennan and Guice military parks are today.

The USO is not a part of the federal government. It is a private organization dependent on donations from individuals, organizations, and corporations, and is supported by the good will of volunteers. It was founded on February 4, 1941, at the recommendation of President Franklin Roosevelt to provide resources and recreational opportunities for members of the United States armed forces.

Today, military personnel can benefit from the USO at airports. Our Gulfport-Biloxi International Airport has a section set aside to assist military travelers. It opened in 2007 and is an area where military personal can relax, enjoy food and beverages, connect devices to Wi-Fi, play video, board and table games, and access a library.

Did you know that some renowned Biloxi Citizens were schooled at the Gulf Coast Military Academy? The all-boys facility first opened its doors in 1912 in Gulfport. The academy promised to provide both Military and academic training. Its senior campus (formerly called the Naval Retirement Home) closed in the 1950s. The Junior division closed its doors just east of that facility in 1976. Its motto was “Send us the boy and we will return you the man.”

1914 yearbook, Mr. Dulion lived “far away” and spent much of his day commuting by car to and from school. His ambition was to be a merchant, and a successful merchant he certainly became, as proprietor of the famous A P Dulion store at the northwest corner of Reynoir and Howard.

Later, the mercantile establishment became known as Joyce Department Store. This three-story brick structure was located at the northwest corner of Howard Avenue and Reynoir Street. Joyce’s was torn down in the 1970s during the Urban Renewal program to make room for the widening of Reynoir Street.

Long ago, our very own Biloxi Mayor Andrew "FoFo" Gilich also attended the Gulf Coast Military Academy. In 1960, he received a special award for the Best Cadet Leader. That year, 12-year-old Cadet Lt. Gilich was also awarded the highest grade in the school. He received leadership and academic awards each term and was the commander of Company D at the Academy. Seems Mayor Gilich learned his leadership skills early in life!